At the bottom of this post is a screenshot from the spreadsheet I was using in 2016 when I became serious about tracking my income, spending, and my investing.

In hindsight I wish I had made these posts in real-time, as my situation was unfolding. I always had intentions to do so, but, I was super focused on graduating at the top of my college class and landing a job that would triple my income.

Let’s see what we’ve got!

I was in school in 2016. I went back to college on a mission to increase my earning power. I remember being pretty happy with these numbers at the time, and looking back I feel the same.

The numbers for the month show that I was technically investing money I didn’t have. My spending for the month is almost equal to my income. I had an emergency fund built up at this point and I had made it a personal goal to save between 25 and 30 percent of my income while in school. This wouldn’t be sustainable if these numbers stayed this way, but at the time I wanted nothing more than to throw as much money into the market as I could.

I followed the “pay myself first” method. A method I still follow today. It works for me. It’s changed everything.

Click the picture below if you want to explore the nitty gritty of it. 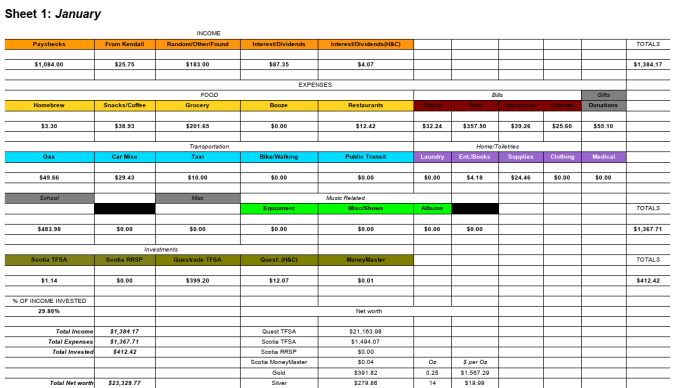